New Delhi: The Employees’ Provident Fund Organisation has supported a labour ministry proposal to allow its subscribers switch to the National Pension System but said the move needs to be backed by suitable amendments to the Pension Fund Regulatory and Development Authority Act. 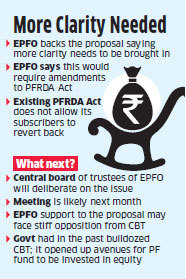 The Central Board of Trustees of the EPFO, chaired by the labour minister, is likely to meet next month to deliberate over the proposed amendments, following which the retirement fund body’s view will be finalised. The labour ministry had called for a tripartite meeting last month on the proposed amendments to the Employees’ Provident Funds and Miscellaneous Provisions Act, 1952, which 10 central trade unions boycotted.

The Central Board of Trustees, comprising representatives of employees and employers besides people from the Centre and the state governments, will consider the EPFO’s views before the matter is sent to the labour ministry.