Link Aadhaar with your mobile is important for Covid Vaccination

New H1B Wage Rule – How it works and effects

You Need Not Pay Delivery Charges For LPG Cylinder

Hindustan Petroleum Corporation Limited (HPCL) has released a useful piece of information for all its LPG cylinder users. It has informed its customers that they do not need to pay anything extra to the delivery person delivering them gas cylinders at their doorsteps, irrespective of the floor/apartment.

It must also be noted that in November last year, oil companies announced the implementation of home delivery of LPG cylinders, only on entering the OTP provided while booking the gas cylinder.

Kareem Ansari, a resident of Hyderabad had filed a RTI petition against HPCL, on being asked to pay an additional charge for delivery of LPG cylinder at his house, by the delivery person.

In response to this petition, the gas company stated that consumers do not need to pay anything extra for cylinder deliveries.

They have the authority to refuse paying additional delivery charges, if asked by the delivery persons.

In its response, HPCL stated “The responsibility of the gas distributor to deliver the gas cylinder at the doorstep of the consumer irrespective of the floor location in the building/flats without collecting any additional charge other than the amount mentioned in the bill.” 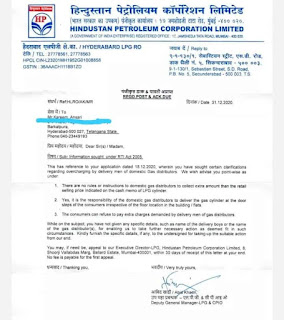 EPF advance withdrawal rules for any of needs, 5 things you need to know